Repairs in Scotland or near Inverness?

Anyone in Scotland (Near Inverness) who can help me diagnose my suspension issues ASAP. I have an MOT due.

I had (two years ago) a rattle coming from the front suspension and a creak when going over dips in the road at 20mph+.
There was also a clunk when dry turning the car.

I thought it was the suspension so I replaced them both two years ago with new shocks and bearings as the previous top bearings were rusted to hell.
I also replaced the drop links 2 years ago I did not then replace the ARB bushes.
The noise went away.

Last year, just before the MOT, the rattle and creak reappeared.
From last years MOT it had an advisory that a drop link was not secure and a new one was needed.

As I had a company vehicle, I rarely used the A2, so left the A2 for many many months in the Scottish weather over Autumn and Winter and Spring.

So when the car got recommissioned, I finally replaced the drop links.

The rattle and creak were still there.
I have not had a flat enough service to investigate the issue over Covid and added to that I lost my job due to Covid.
The 5th August deadline draws nearer for the MOT to be renewed and I noticed the front tyres needed doing so had them replaced.
Then one of the wheel nut caps fell off as they were not secure and the metal ring inside it was missing, the rest were also rattly due to the same issue so I removed them.
The rattle and creak were still there.
I stopped on a B road, got out of the car this morning after a quick dog walk and decided to wiggle the front wheels laterally. There is a rattle on the front offside wheel similar to the noise I hear inside. I assume this is a driveshaft issue?
I have not had time or space to check if the driveshaft shield is also rattling.

So I need help now as I need my car as I need a job and can't afford another car right now.
A 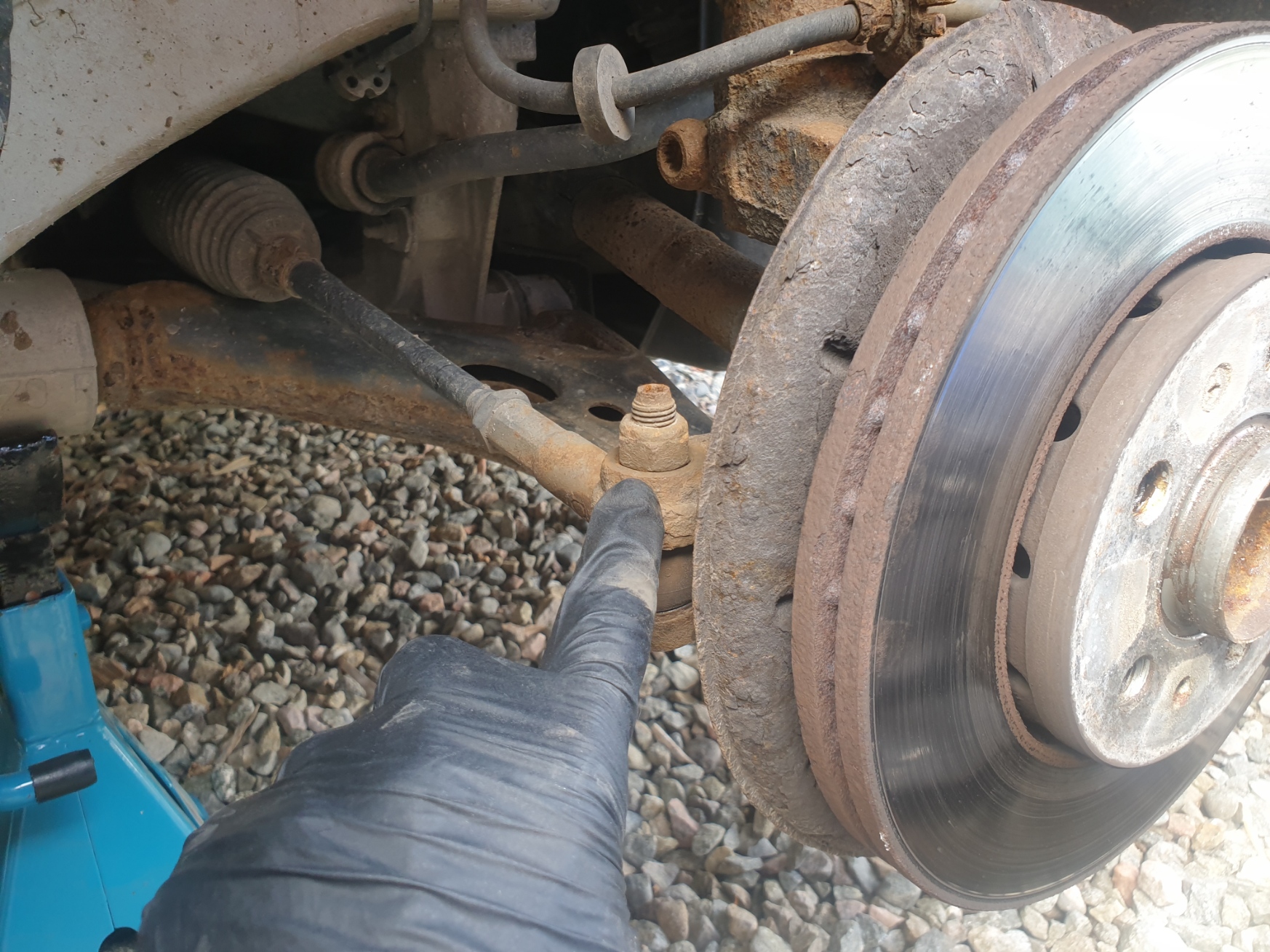 What is that?
That is the rattly thing and it's hard to remove or tighten as it's seized.

More importantly, is it expensive?
6

Track Rod End. You seem to be pointing at the Locknut that fastens the Track Rod End to the Steering Arm. Should only be a few Quid. Have you tried tightening the Locknut ? It’s more likely that the Ball Joint in the Track Rod End is Worn, giving some play. Probably best to start spraying the Locknut with Releasing Fluid now. Omega 636 ( Jamaica Oil ) being the best ever. Make absolutely sure you do NOT get it anywhere else e.g. Brake Hose but especially NOT on the Brake Disc or Pads !

If I needed a New Track Rod End Fitting down here in Cumbria I would probably go to a local Tyre Depot who do that sort of work, because the Tracking must be checked and correctly adjusted afterwards, otherwise you may be spending a lot more money on New Tyres.

There should be loads of Omega 636 ( Jamaica Oil ) around Inverness. It is widely used in the Oil and Gas industries.

Ah hah. Better start looking for that oil as both of my track rod ends are rattly.
Sounds like a medical complaint. lol

Looks like it is going to be a sod to tighten as the area to work in is minimal.
Any hints or tips would be greatly appreciated.

If releasing oil is unsuccessful, a nut splitter will help remove the nut. I suspect that it's not just a question of the nut but the whole track rod end.

Hiya, cheers for that. Just looked at the rubber boot around it and it's split. just ordered 2 meyle HD ones from AutoDoc.
A