Hey all,
I’m new to this so I’m posting to get some idea that my troubleshooting is on the right track.

Here’s the symptoms:
We’d driven on the motorway for about 90 minutes, pretty constant speed around 65-70mph. Traffic was moving so there were no periods stopped or doing little movements in 1st or 2nd gear.
The temperature gauge has, since I got the car, been temperamental, sometimes it will sit straight up at 90, intermittently it will just be bang over at the left, as if it were not reading at all. Same on this journey, it was intermittent.
Approaching the junction to join the M3 southbound on the M25, the traffic was queuing badly and we spent sometime sitting edging forwards.
At this point the temp gauge was again not giving a reading and the Engine Warning Light and EPC light came on.
There was no loss of power, no limp mode engaged.
My partner did a bit of googling and reading on here and all signs pointed to the coolant temp sensor on the engine.
I didn’t really want to stop in the junction, plus the M3 is a ‘smart’ motorway with no hard shoulder, and given the car seemed to be running fine and the fan was working, we elected to take it easy and keep going till we got to Fleet Services.

As a precaution I got the AA out, and while waiting thought through the issue. Here’s my assessment, which the AA guy later agreed with, but your collective wisdom might know better...

The coolant temp sensor connects to 2 circuits (hence having 4 wires) the first is to feed data to the Temp Gauge in the dash. The second is to provide data to the engine management unit (we call that a CCCU is that right?).
So a faulty connection somewhere between sensor and gauge might cause the loss of reading.
Equally a faulty connection could trigger the car brain to show a warning light if it couldn’t read from the sensor.
The first of these happens regularly, the second only this once so far.
Having had a look at the sensor, the cable looked a bit kinked as it connects to the sensor and the wires were visible for about 10mm where the insulation had pulled back.
Wiggling it, carefully, with a rod, caused the temp gauge to alternate between working and not. The warning lights for engine and EPC did not make a reappearance.
The AA mans VCSD box didn’t pick up an error and was getting good readings from the sensor, presumably via the EPC.
We loosened the cable to give it a little slack and I rolled the dice and drove home.
Only once did the temp gauge stop then recover itself. The lights did not make another appearance.

So my thought is to replace the sensor (part ordered) and have a look at the condition of the cables, pins and connector. Add better insulation and seat it with more slack.
Comments?
R

Mine had an intermittent 'open to earth' fault in the dashboard-feed side of the coolant sensor which would do exactly as you said - read nothing, and then abruptly start reading (and then stop again) with no warning, usually going over a rut. This did not cause warning lights, just the erratic gauge (and the open to earth fault code registered in the dashboard controller with the ODB reader). Replaced the sensor, problem went away (but then highlighted the fact that the thermostat was also stuck open - once that was replaced the temperature gauge reading has been fine ever since).
Does also sound like the connector itself may have been slightly compromised so fettling this certainly wouldn't harm.

The other EPC /engine light sound a bit more spurious - could be caused by any one of a number of things - what engine do you have firstly, and secondly, what condition is the battery in (thinking about voltage dip when you were in traffic)?
A

Lets go belt and braces here. Replace the temp sensor with a good quality OEM one. Obtain a new plug and say a foot of wiring and splice that in to replace your plug. Replace the thermostat again for a good quality OEM one and flush replace the coolant with premixed G12-G13.
You are correct about the 2 circuits in the temp sensor, one for the gauge the other for the ECU ( not CCCU ). Gauge circuit intermittent. But for warning lights could have been ECU side shorting itself or even to the temp gauge side.

Can not remember if the plug is pins or sockets.
If sockets then this replacement is perfect. 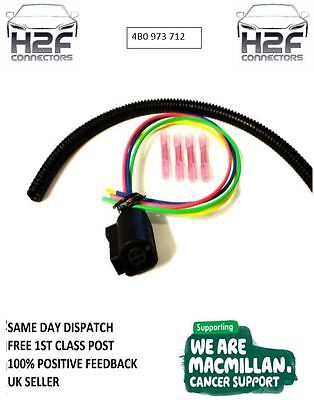