This weekends mod - double DIN conversion without removing the dash

As many of you will know we fitted a DAB roof aerial to my sons A2 and couple of weeks ago, so now for the main event, an Android unit with DAB, Bluetooth streaming and phone calls, CD, nav and reverse camera. We had previously fitted the reverse camera whilst the headlining was removed to repair the open sky and it was easier to run the cable through the tailgate grommet and along the roof lining, down the A pillar and behind the glovebox. My son fitted the GPS aerial behind the instrument binnacle and the microphone for the hands free in the overhead interior light panel. So all the ancillaries were in place ready to change the original single DIN Audi radio for the double DIN unit.
After much consideration we thought it easier not to use the Audi double DIN cage that I purchased from A2Steve as it looked to be too hard to achieve. So I bought an aftermarket standard double DIN cage and made it work.

Firstly, with everything removed we cut the cross members out along with some protruding plastic on either side. 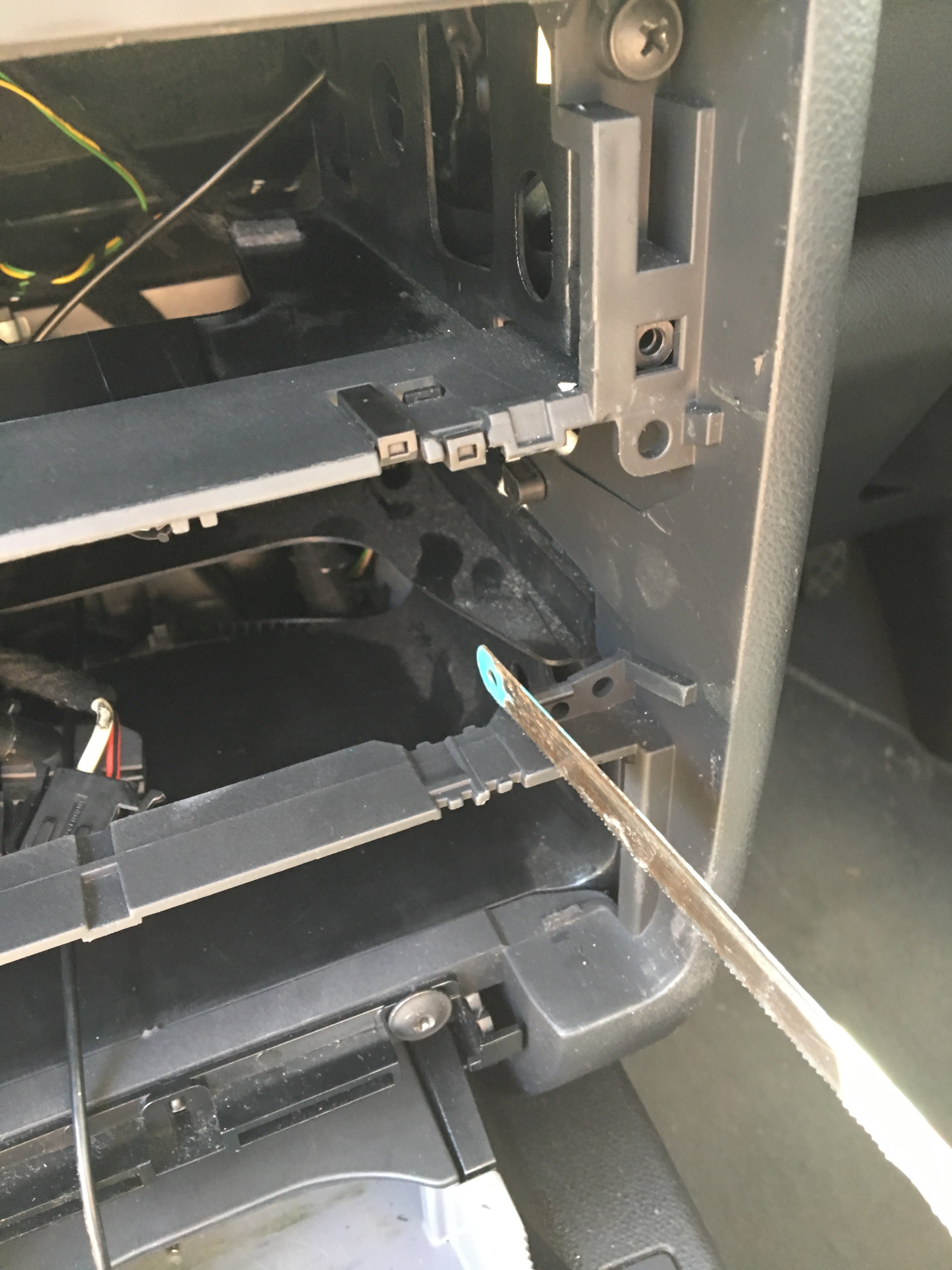 The next thing was to place the climate panel in position, we had previously shaped the corners with a dremel to fit the dash 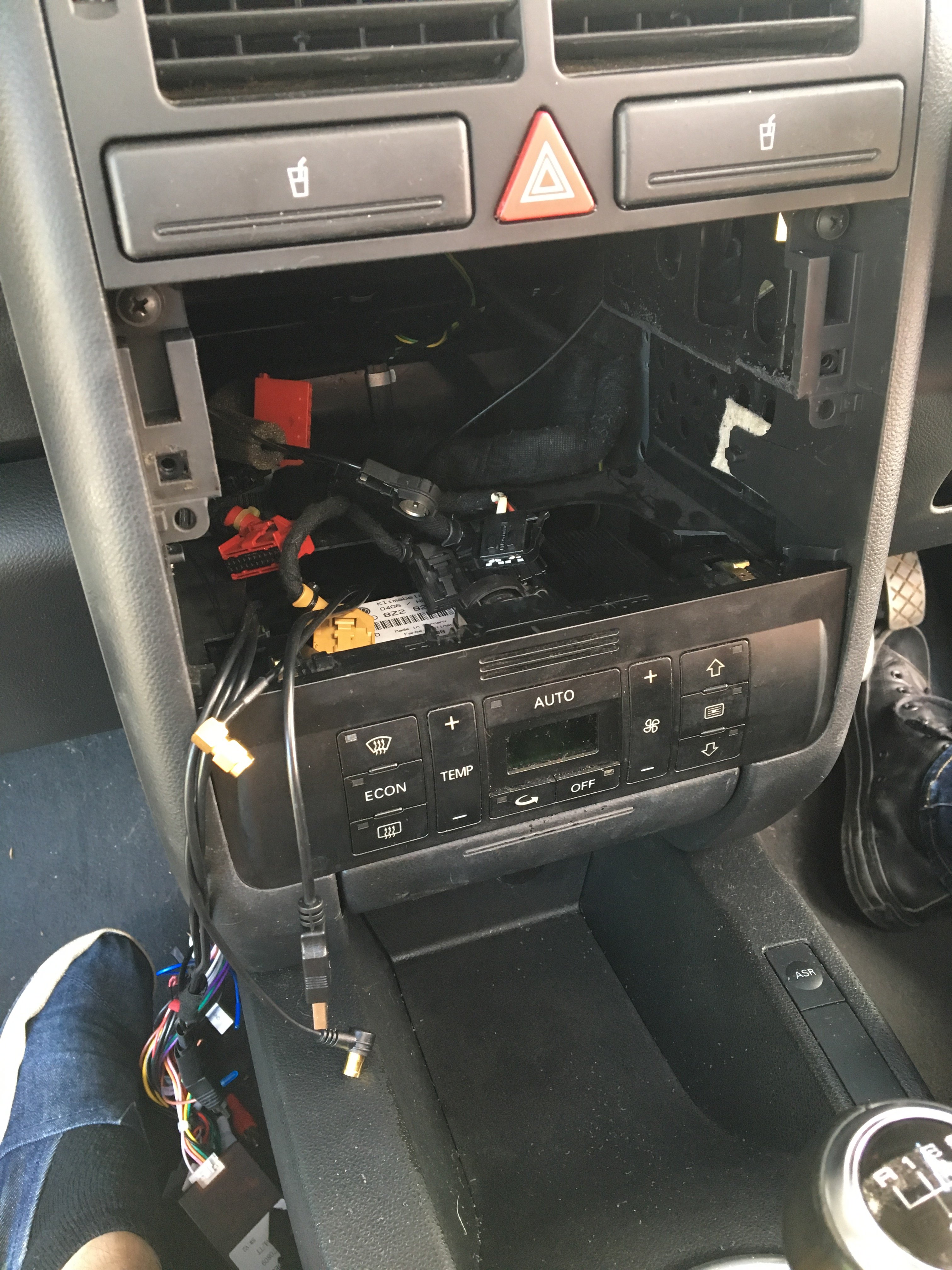 We could then offer it up and determine how much to trim from the top and bottom, which was 6mm After some initial issues with the DAB lead and getting a new one everything worked perfectly. As a bonus and a result of fitting the reverse camera, when the car is put into reverse it mutes the audio and we can hear the parking sensors.
We haven’t had chance to try the Bluetooth yet, but the DAB and FM works along with my sons music library that he uploaded to the unit.

nice job
any chance of a finished picture

And here’s the DAB aerial on the roof depronman said:
nice job
any chance of a finished picture
Click to expand...

I think you posted before I put the last few pictures up?

yes I think I did

nice OEM look, I hope the head unit last longer than my Chinese one did, now changed it for a Pioneer carplay 2Din unit, MUCH better

At least using the standard cage allows many other aftermarket units to fit, so if it doesn’t last we’ll get another. However, this one was not cheap, it was £287 with the reverse camera, so I hope it lasts for a while.

Another couple of photos in the day light today. Utterly brilliant work great mod ??.. I know the pain of doing the double din dash conversion all to well but this looks much easier and very OEM.. great results.

Have you by-passed the factory speaker wiring and amp?
I had an aftermarket unit in mine, but the rear speakers never worked..

Gary - G said:
Have you by-passed the factory speaker wiring and amp?
I had an aftermarket unit in mine, but the rear speakers never worked..
Click to expand...

We fed the rear amp with the RCA outputs from the head unit, the rear speakers work just fine.

Been busy and missed this, looks a great job!

How to guide technical author and custodian

Constantly amazed at how you find ways of tackling repairs and mods like this.

Hats off to you.

I may be in touch shortly about this conversion, it ticks a lot of boxes for me.

@Kleynie We are looking for a android double din unit for Sam's car. What make and model is this unit mate?